One of the remarkable features from the early years of Hot Wheels is the artwork. Great car designs came from Harry Bradley, Ira Gilford and Larry Wood. Amazing package art was handled by Otto Kuni. But when it came to classic comic images with story telling, Mattel’s go-to-guy was Alex Toth. 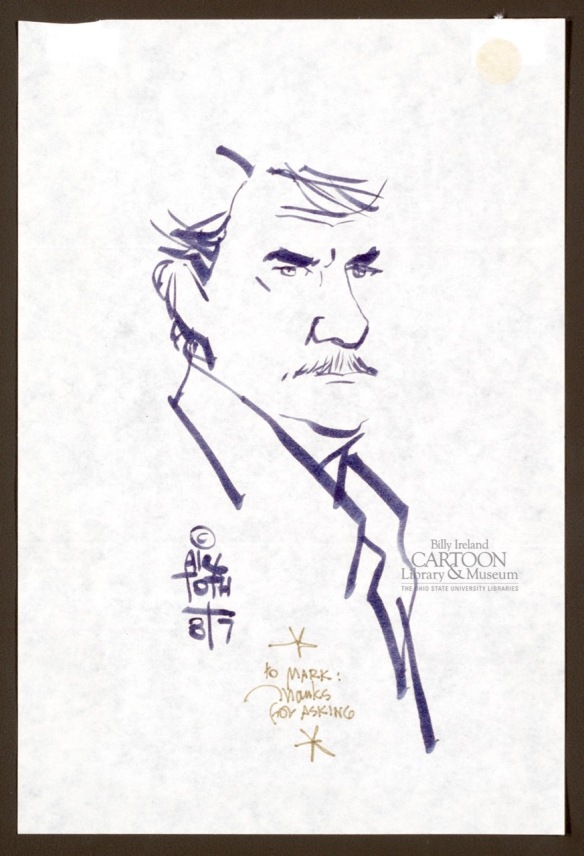 Self portrait of Alex Toth.

Alexander Toth (June 25, 1928 – May 27, 2006) was an influential American cartoonist whose work began in the American comic book industry during the 1940s.  But he is also known for his animation designs with Hanna-Barbera throughout the 1960s and 1970s. His TV work included Super Friends, Space Ghost, The Herculoids and Birdman. 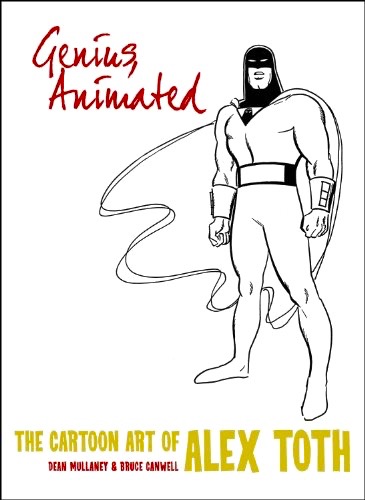 A book of Alex Toth’s work featuring Space Ghost on the front cover.

For Mattel, he worked on the 1970 Hot Wheels comic book issues, the 1969 Saturday morning “Hot Wheels” cartoon series and all 4 Sunday newspaper cartoon ads from the summer of 1970.

The Hot Wheels comic book project began with this promotion.

A total of 6 issues were generated and Alex Toth was heavily involved in the first five. 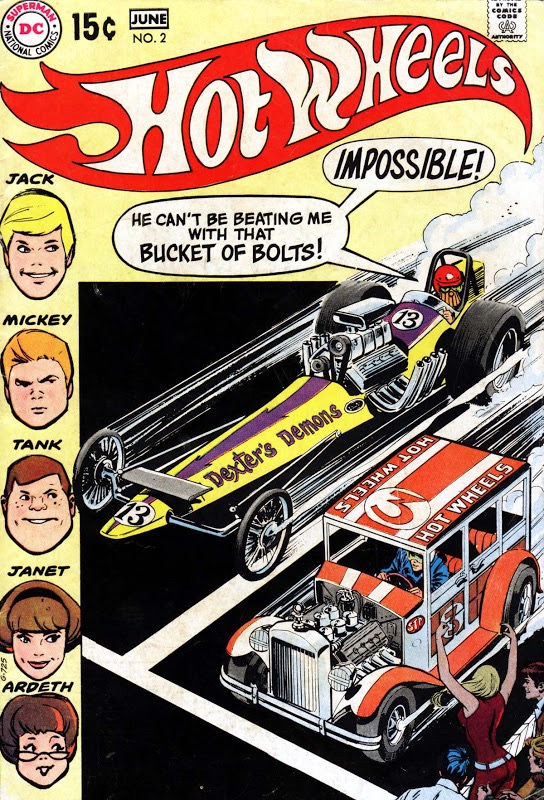 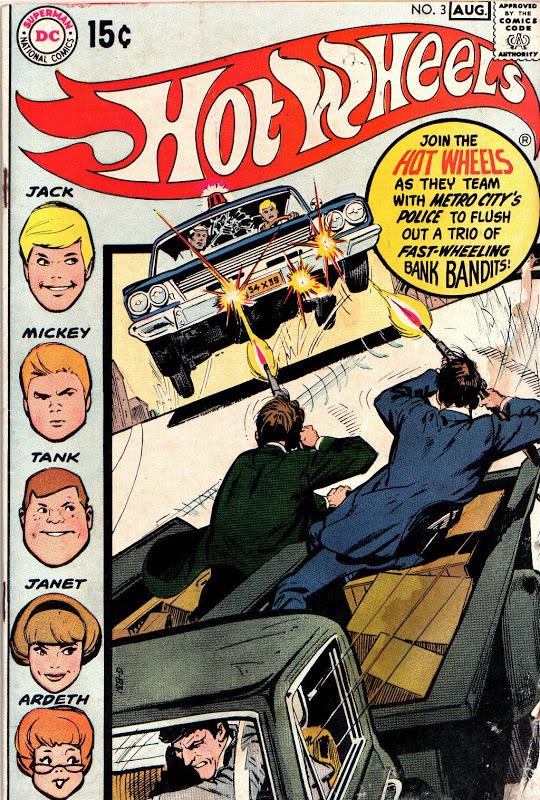 My favorite as a kid was issue 2. Here’s part of the story line from that issue courtesy Captain Videos Secret Sanctum. http://captainvideossecretsanctum.blogspot.ca/2012_02_01_archive.html 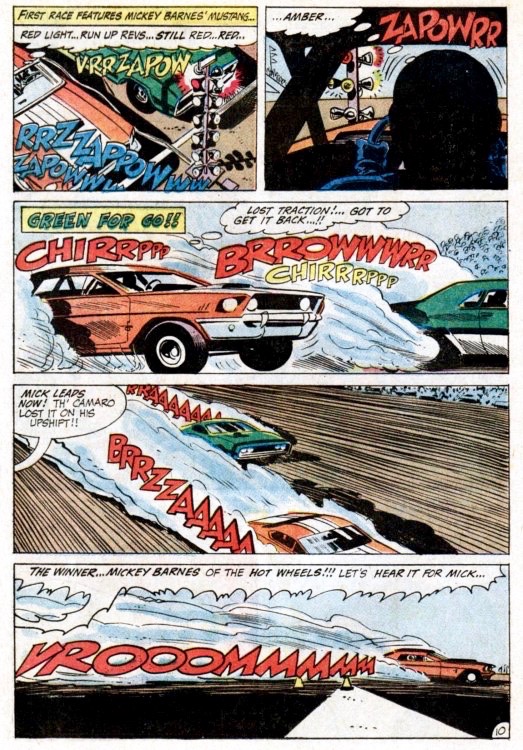 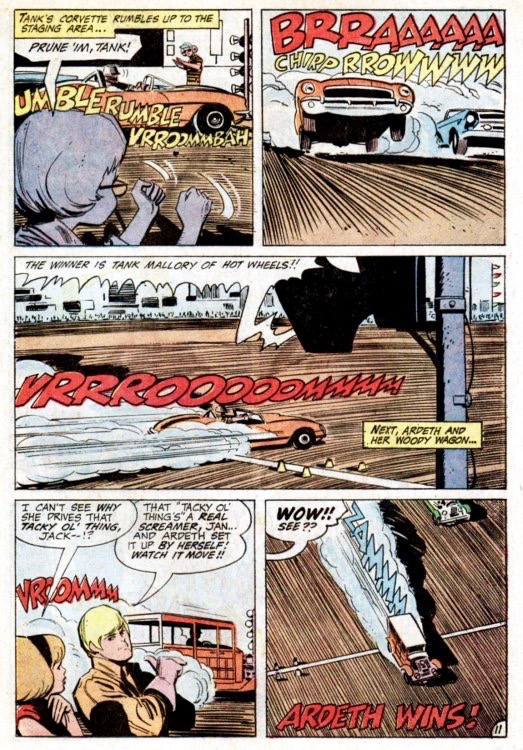 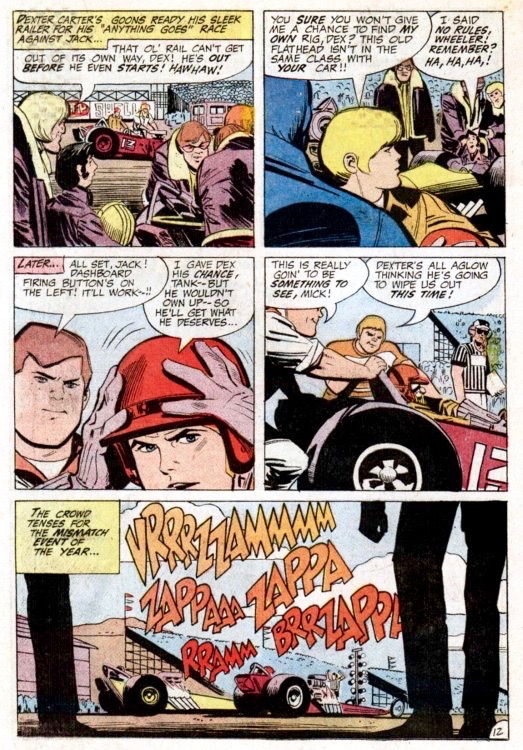 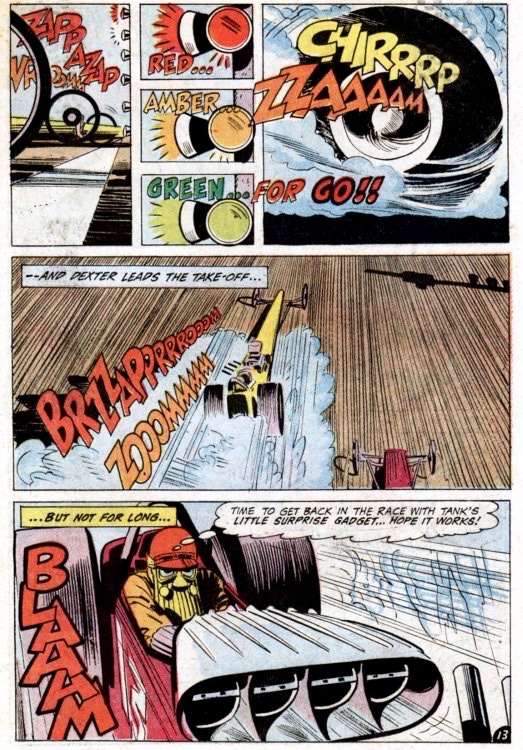 In the late 1960s there was one time, and one time only, for every kid to watch cartoons. That was every Saturday morning. The Hot Wheels cartoon show first arrived on September 6, 1969 and new shows continued to air through December 20, 1969. 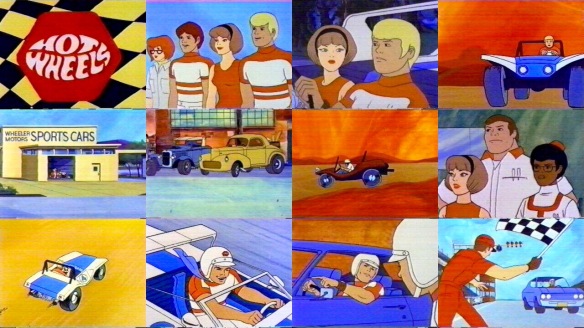 A total of 17 shows were produced (each 1/2 hour long), often with 2 episodes per show (a total of 32 episodes were made). This popular cartoon remained on the Saturday morning circuit for 2 years from September 6, 1969 to September 4, 1971.

Here’s a link to the cartoon’s introduction.

Here’s a show with 2 episodes: “Ardeth the Demon” and “Tough Cop”.

Back in the day, the Sunday newspaper “Funnies” always had the best comics. They were large. They were colorful. They told the fullest stories. As a kid, you spent the whole week looking forward to them. During the summer of 1970 Mattel took advantage of this enthused audience and ran a series of ads in comic strip form. I know of 4 ads. The first showed up on July 19th and the last on Aug 30th.

The story line always starts with 2 friends, the Hot Wheels Kids, at the track watching their automotive heroes in action. Either Dan Gurney or the duo of Tom McEwan & Don Prudhomme would be in a spectacular race.  But each episode took what transpired in the real world and then replicated it with a Hot Wheels set.  The kids demonstrated the ins and outs of their toy tracks much to the interest of Gurney, McEwan & Prudhomme. 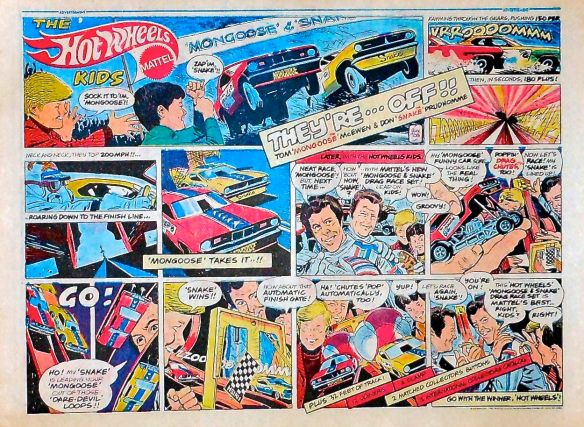 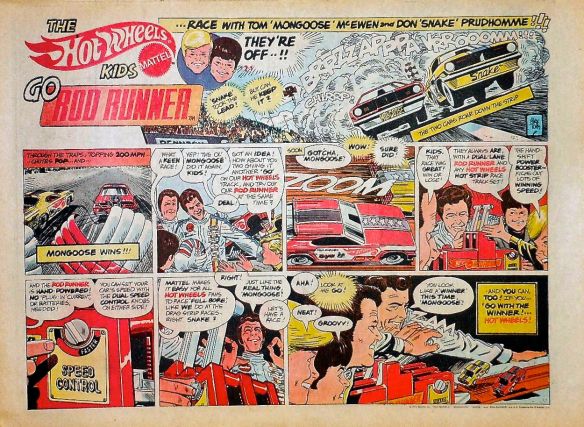 So there you have it. The simply amazing artwork of Alex Toth for Hot Wheels. He certainly captured how Hot Wheels are “Still fast. Still fun”.